Cheapest Ferrari Hire in the UK by PB Supercar Hire 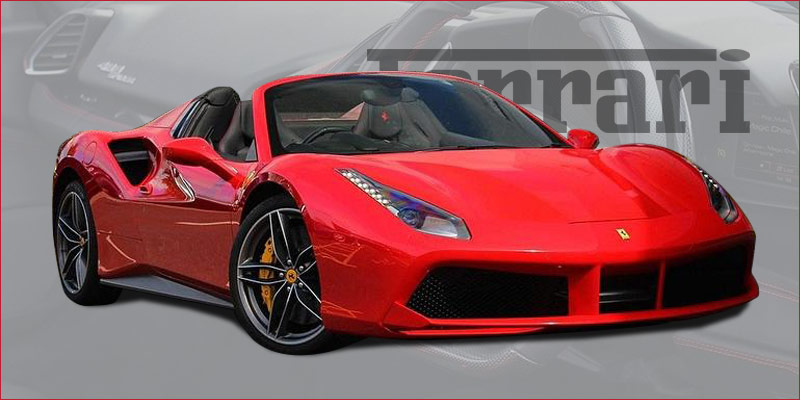 Our Ferrari 488 hire is the ultimate Ferrari. Rent our Ferrari 488 to enjoy the thundering sound of the V8, 661 bhp engine racing to 60mph in 3 seconds and a top speed of 206 mph, with draw dropping speeds and the amazing kerb appeal this is the car to be seen. 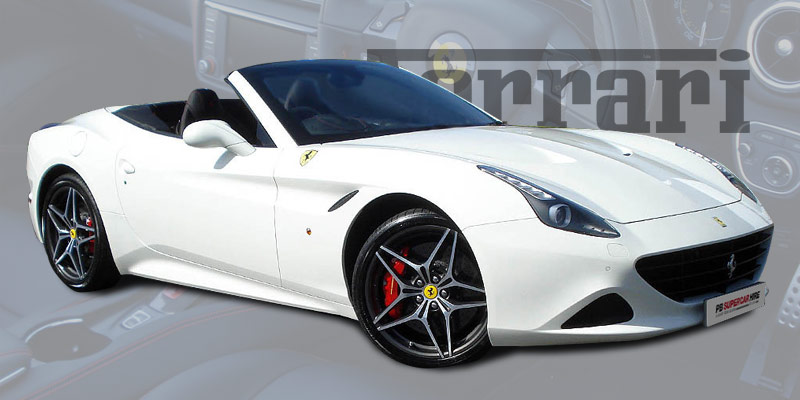 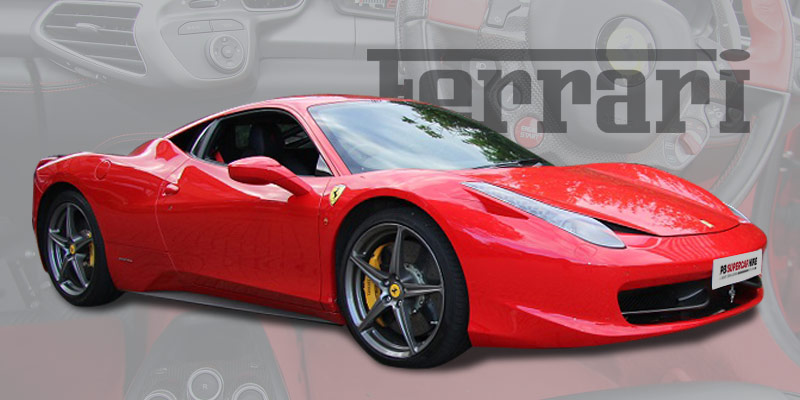 This Ferrari hire car is the successor to the Ferrari 430. The exterior features a number of revolutionary elements all designed to improve aerodynamics and generate downforce.  Our Ferrari hire car only weighs 3042lbs, does 0-60 in only 3.1 seconds, and will hit an amazing top speed of 201mph. A truly luxurious interior, with exquisite quality leather and aluminium features. We have various rental options that will you with a unforgettable Ferrari hire experience. 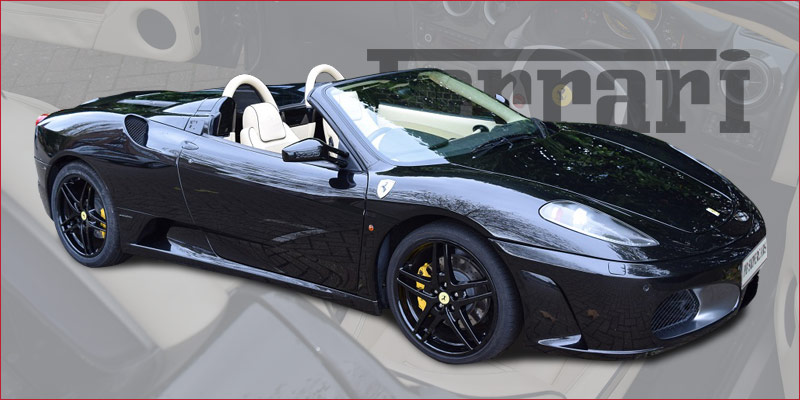 This Ferrari hire has won much praise in the automotive press for its performance, handling, and overall quality. With a 0-60 mph time of just 3.5 seconds. Find the right piece of road to exploit its abilities and it is got the potential to leave you light-headed. Our Ferrari hire cars handling is fantastic in almost every way. The steering has genuine feel, a rare commodity these days, and it generates massive levels of grip, while all the time demonstrating top-drawer agility. It never ever feels like an edgy mid-engine car. Book this car and it will be a Ferrari hire experience like no other!

Rent a Ferrari From The UK's Leading Ferrari Hire Specialists

Ferrari have always been a symbol of supercar excellence. Over the years they have honed their skills and delivered some truly exceptional supercars for hire. Renowned for designing cars for the supercar purist, Ferrari understand what is required to make us happy and passionate. Effortless styling epitomise the supercar breed with many trying, and failing, to copy or even come close to their almost magical properties. They look simply sensational with their classic lines, often taking reference from models before, but always trying to push forward and be new and fresh. There is something about a Ferrari which is difficult to quantify, but it is almost enchanting.

Inside provides a raw, brutal design with a sense of craftsmanship for which Ferrari excel. Ferraris are not without gadgets, but they are built to be driven and built to be driven by people who understand supercars. They feel like a real racing car, because that is what they are, none of the pretense you find with lesser marquees.

The real purpose of the Ferrari is the performance. Light and effective, the drivability is second to none. You know this is as good as it gets and if you can master a Ferrari then you are a real driver. Eye watering power and blistering cornering make hiring these cars a physical, visceral experience from which you emerge with a massive grin on your face. The engine sound alone is worth a weekend away.

We have many Ferraris to hire, all free for delivery in London and all London airports. We find many of our clients know the model they want, but if you’re unsure then give our sales team a call and they will talk you through your options.

If you choose to rent a Ferrari at PB Supercar Hire, you will have the choice of stunning cars, all lovingly prepared and maintained in house by our team of experienced Ferrari hire specialists. PB Supercar Hire has been hiring Ferrari's since 2006 and know these cars and the supercar industry as a whole inside out. All the Ferrari cars we have for hire are owned by us; we do not sub hire or allow 3rd parties to get involved. Don't fall into the mistake of hiring from a broker as this has many pitfalls. You can view our guide to Ferrari Hire to help you through the process of choosing the right Ferrari hire company.

Ferrari offer timeless quality and a refined elegance and can be the perfect choice for supercar hire. Anyone can look good behind the wheel of a Ferrari and present an image of sophistication and style. Alongside the looks also comes comfort, Ferrari engines deliver a punch and sound incredible that has to be experienced.

Ferrari began its history in 1929 when Enzo Ferrari formed the Ferrari Scuderia Race team, which in recent years has become the most successful Formula 1 team to date having taken 15 drivers titles and 16 construction titles most famously during the Michael Schumacher years. Most of the special edition lightweight race specification road cars use the name "Scuderia" to indicate the sportier feel to the car, however it was not until 1947 that Enzo Ferrari branched into road production cars. For most of this period Ferrari was owner by Fiat until in 2016, when it split and retook total control as just Ferrari. In 2014, Ferrari was rated the world's most powerful brand. The most expensive car ever to be sold is the 1962 Ferrari GTO for £27.6 million pounds. In 2016 Ferrari produced 8016 cars, with revenue of £2.9 billion, and operating income of £595 million. There are currently 3115 employees worldwide.

Although Enzo Ferrari formed Ferrari Scuderia Racing in Modena, Italy, at the start it was a non works team using Alfa Romeo's engines and chassis and the Alfa badge, but when Alfa Romeo withdrew from Motorsport in 1933, Ferrari started using the famous prancing horse badge on the engine covers, and in 1935 the factory in Modena designed and built its own car but called it the Alfa Romeo Bimatore. This car was in essence the first Ferrari designed and built by Enzo at Modena. In 1939 Alfa Romeo took its racing arm back in house again with Enzo Ferrari heading up the team, disbanding Ferrari Scuderia Racing Team. A few years later Enzo left Alfa Romeo legally bound not to start or use his Ferrari Scuderia racing team name again for 4 years. He instead used his facility at Modena to produce aircraft parts and an unofficial race car on the side, he also moved the factory from Modena to Maranello. Both of these towns names being used on recent Ferrari models - the Ferrari 360 Modena and Ferrari 550 Maranello. In fact nearly all Ferraris produced have relevance in history to a namesake.

It was not until 1947 that the first full Ferrari badged car was produced and raced, winning the Formula 1 World Championship in 1952 and 1953. Ferrari has gone on to be so successful as a brand that there are even 34 Ferrari shops across the world that sells merchandise and clothes. Furthermore most of this merchandise, ranging from mugs to trainers can be found in general shops all over the world. There is even a "Ferrari World" theme park in Dubai, and the factory at Maranello has a museum open to the public.

Over the years until 1988, the year of Enzo Ferraris death, many famous Ferrari road cars were produced such as the GTO, but arguably the 1988 F40 is the greatest supercar ever made. This was the last car that Enzo oversaw. The supercar was the quickest most aggressive Ferrari had produced and could be found on every little boys (and dads) bedroom walls in poster form. As a tribute to Enzo, Ferrari produced the £500,000 pound Ferrari Enzo in 2002, with a further 10 race spec models that were kept and prepared at Maranello- Even if you has the money Over £1 million) and connections to buy one of these you were only allowed to use it on the Ferrari race track supervised by a full Ferrari mechanics and race team! Originally this car was to be called the Ferrari F60, following on from the Ferrari F40 and Ferrari F50.

The first Ferrari road to go into production was the sophisticated and elegant Ferrari 166 Inter. Over the years the Ferrari supercars have featured bodywork designed and customised by independent coachbuilders such as Pininfarina, Scaglietti, Zagato and Bertone usually with these names being added to the model, but more recently Ferrari now uses in-house design from the Centro Stile Ferrari.

The Dino was the first mid-engined that Ferrari produced. Ferrari also built 2+2 versions of its mid-engined V8 cars such as the California. Although they looked quite different from their 2-seat counterparts, both the GT4 and Mondial were closely related to the 308 GTB.

Ferrari has also produced several front-engined 2+2 cars, the latest being the V12 Lusso and V8 Portofino and Lusso T. The Ferrari Testarossa remains one of the most famous mid engine Ferraris of all time.

If you’re wealthy enough you can even commission Ferrari to design your own one off car based on one of the Ferrari models, Eric Clapton recently did this calling it the Ferrari SP12 EC, based on the Ferrari 458.